It's all about the Vina

I have mostly written about my personal feelings about this experience, particularly the loca parts….but this is really about the vina.  I haven’t really described how I spent my summer and some of the key learnings of setting up a vineyard:

Once planted in March, I mistakenly thought I was just supposed to let the vines grow all year, in order to make strong roots.  I put 30 inch grow tubes around the plants, to protect against the rabbits, and off they went.

This was half true.  I was supposed to also prune the vines, 700 of them, in bonsai-like fashion, to establish the cordons.  Thirty-inch grow tubes were too high for the heat in my area.  The leaves inside the tubes died and I ended up with tufts of leaves gasping for air at the top of the tube. 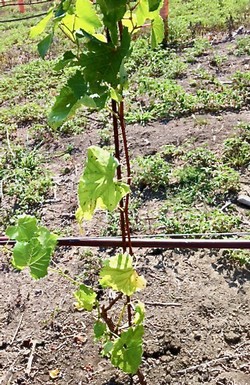 I also misunderstood about the fertilizing.  I thought I didn’t need to fertilize for several years, based on my soil sample.

I did have good irrigation and didn’t waste water.  However, I did have silt in one filter, which limited water to 4 rows in Block A.
It is a correct statement that you have to really be in the vineyard to know what is going on.

By June, I had figured out that I was already behind in my vineyard work….basically right as the heat of summer hit.  I pruned all the plants down to the best one vine to form the trunk and taped it to the stake.  At this time, I also cut the grow tube down to 18 inches, which I should have done on Day One.    These two tasks literally took weeks and weeks to complete.  As you know, I have a full-time job and only work the vineyard at nights and on the weekends.

Even with these escapades, there were many very fortuitous parts of this experience, beyond the obvious “won’t make these mistakes again” parts.

Somehow, I managed to plant the vineyard so the sun is at my back in the afternoon…accidently very smart.
I also learned to sit so that the finished vines were in front of me… which really helped with my enthusiasm.
I landed on a combination of shirts, hat, shorts, and shoes that served me well.

Most importantly, I really learned from other outdoor workers around town, what they wear and the cadence of their work.  I had to leave the chaos of my normal work world behind and work at the cadence that nature allowed.  I learned that you can’t be in a huge hurry, timing how long it takes to do a row, how many cuts per vine, etc….how against nature, and actually dangerous, that could be.  How sharp objects, heat, and fatigue don’t mix.  It was about sitting in front of each plant, briefly studying the best way to trim it to guide it towards the proper shape, taping that to the stake, and moving to the next plant.  Like the REK song, Mariano, it was like working like a piston, steadily, constantly, doing the best I could, not too tired to work the next day.

This summer, I worked many evenings until dark.  The heat was just terrible this summer and during the week, I had to wait until almost 7 to get out and get in a couple of hours of pruning.  But you can’t imagine what an amazing experience that was….the warm gentle breeze, the complete silence except for the crickets chirping,  the beautiful sky and vines.  I tried to take pictures of the moon rising over me, but my old iPhone didn’t capture it very well.  Once, as I moved down the row to the next plant, a little rabbit was sitting right next to me.  She was hidden in the grass, her ears lying flat against her back in camouflage.  I talked to her and she didn’t move….and after I was finished with that plant, I moved on to the next one and let her be.

And so, this summer was a time of learning.  It has been good to learn something new.  I had my book-learning from the Viticulture Program.  In practice with my vines and on my property, and with my interpretation, I didn’t have completely perfect results, but the vines aren’t all dead!

I estimate I have about 90% survival rate, which I will take and build on.

Some of the vines are trophies 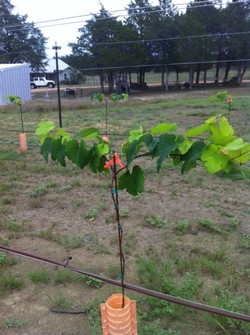 Some are persevering despite my ignorance 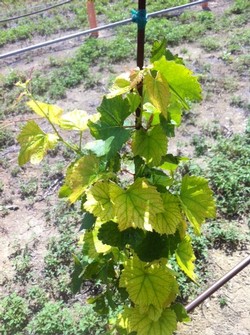 And some didn’t make it 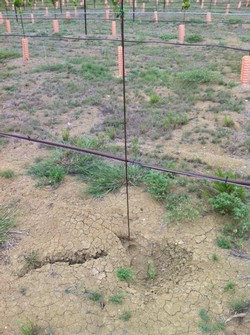 This I equate to golf…it’s a beautiful, but exasperating sport.  Golfers normally hit enough good shots to keep them coming back for more…. it’s the same with a vineyard.

My faithful tools didn’t let me down 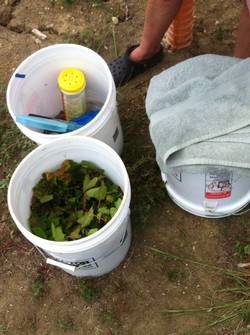 One for pruning waste,

I am now almost caught up now and we will be ready for Fall.  There were no heat strokes, amputations or divorces.   All summer, I just couldn’t wait to see how the vines were growing and improving….and our family had the time of our lives.   I couldn’t ask for more.   L

Commenting has been turned off.